How Many Frames Per Second Are Movies? How Many Frames Per Second Are Movies?

When it comes to movies and games, a good frame rate is essential for a smooth, lag-free experience. The Fps in movies is a measure of how many frames are being displayed on your screen in a second to create the moving picture that you see. When a video is playing there is a quick movement of still images and this creates the illusion of motion in your mind. The faster these images are, the higher the movie fps and the smoother the video motion appears. If you want to enjoy smooth movies, a good Video frame rate is a must.

Why Does Frame Rate Matter In Movies?

Talking about movies, a good fps matters because it affects the viewing experience and the style of the video you watch. Different Fps of movies give different results and different viewing experiences. So, when selecting the suitable frame rate, certain factors need to be considered like how realistic you want the video to be, or whether you want to use motion-blur or slow-motion techniques. The Hollywood movies you see are often displayed at 24fps which displays the images much as we see them in the real world, thereby creating a cinematic look. Videos or movies that support a lot of motion like action movies or live sports events require a higher frame rate because a lot of actions are taking place at once. So, you need a high frame rate in movies because it gives your smooth motion with crisp details,

What Is The Ideal FPS For Smooth Movies?

When it comes to selecting the most ideal frame Fps in HD movies, we cannot point out one as the best. While the frame rate is seen as a simple concept, certain things count in making an FPS ideal for smoother movies. Here is a list of the four things that matter in deciding the most ideal FPS for smooth movies.

This FPS is used as the standard in movies and is known to give the minimum speed that is needed to capture videos, yet maintains realistic motion. Some movies have higher FPS, but this tends to be the most used choice.

This is a more cinematic frame rate that is used for capturing motion like sports etc. and had been used in the early days for television. This FPS deals with the standards of TV and electricity that had been set before.

An FPS above 30 is normally used for creating slow-motion videos or for recording footage of video games. Now, many smartphones support 60FPS as well.

Another thing that decides the best Fps in 4k movies is the amount of video motion. More movement requires a higher FPS. This doesn’t always mean that you need a higher frame rate, but it can give you more detail and flexibility. These are a few FPS and how motion works with them.

While this FPS is the minimum required for capturing realistic motion, a more action-filled scene captured at 24FPS will lead to much motion blur.

At a frame rate above 24FPS, you get more detail along with a high motion blur, but this can make the motion appear a bit unnatural and give the soap opera effect.

This FPS is usually used for capturing busy scenes like video games, athletics, or capturing slow motion. Video games are often recorded at this frame rate along with sports because they have a lot of action. 60FPS gives crisp and clear videos in this case.

One thing that determines the ideal frame rate for a movie is the way your video is delivered like through YouTube, Television. The device used to view the video also affects the frame rate. The Tv frame rate ranges between 24 and 30FPS while the best frame rate for film projectors is 24FPS.

4. File Size And The Export Times

One other factor determining the ideal frame rate is the file size and the export times. Higher frame rates have more still images in each video second. So, more information leads to longer export times and bigger files.

The best frame rate is, therefore based on what you want to get. Most films and movies are set at 24FPS. Here is a breakdown of the framerates and what they work best for.

24FPS seems to be an ideal FPS for viewing films in high-definition video. This is the universally accepted FPS for movie theaters where movies are shown at this frame rate. For playback and recording, 23.98 is used in most cases.

25FPS is considered the ideal FPS for PAL, HD videos, the standard of European videos.

30FPS is ideal for viewing HD videos and was also used in the early time of NTSC black and white videos. This format is rarely used today.

This frame rate is used for 1080i HD camera viewing, the double frame rate of PAL.

The 60FPS HD video is used with high-definition equipment that can record and play at this FPS. nevertheless, 59.94FPS is more often used as it supports NTS.

Are High-Frame-Rates Films A Good Idea? 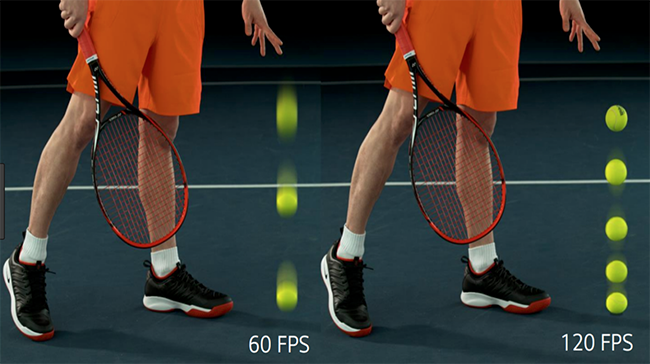 With Fps in gaming, the higher you go, the better the gaming experience, however, this isn’t the case with movies. The ideal FPS for movies is considered to be 24FPS that captures necessary motion while keeping everything real. A high FPS for films won’t always be the best idea because as the frame goes higher, the shutter speed is higher and leads to motion-blurred images. At higher FPS the images can become less fluid, and more discrete.

Why Do Games Need Higher FPS Than Movies?

If the human eye fps stands at 60FPS, it is suggested to have a higher FPS for movies and games. Movies need a lower FPS than games because the clarity and resolution of monitors are way higher than cinema and TV. Games also need a high FPS to feel more responsive than movies because movies aren’t interactive while games are.

How Do I Choose The Best Frame Rate For My Video?

To choose the best frame rate for your video, you’ll need to look at certain things because the best one for you depends on what you’re looking for. You’ll need to see the realism/style, motion, delivery, file size, and export times. Choosing a good frame will require some consideration and thought, so make sure to have a look at these factors beforehand.

Movies require an FPS lower than games because they aren’t very interactive and don’t have as much action involved as in games. Nevertheless, there is no way to say which FPS is the best for your movie viewing. This is why you need to make a careful choice when deciding the best FPS for movies.

Q1. How Many Frames Per Second Are 4K movies?

In most cases, the 4K movies are recorded in 30 frames per second.

Most of the movies that you watch are in 30FPS.

Most movies are shot in 24 or 30FPS, but sports, video games, and TV shows can have a high FPS as 60 or above.

Because our brain sees the motion as very smooth and fluid, the 60FPS videos seem as being surreal and weird.

24FPS is used because it is the minimum frame rate that is suited to make motion appear natural to our eye.

How to Show FPS in Valorant? | Easiest Steps

How Much FPS Does PS5 Have?